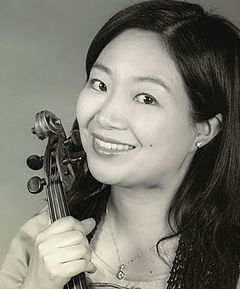 'I try to lead the courses in such a way that everyone feels equal; together we explore the meaning of every note, every phrase, and share our passion for chamber music.'

Born in Japan, Arisa studied with David Takeno at the Guildhall School of Music & Drama where she won all the available violin prizes. As a soloist of the long-established Fujita Piano Trio, she has performed extensively worldwide including at more than 120 different venues in the UK alone.

Arisa has collaborated with various artists including Joshua Bell, Martin Lovett, Alexander Rudin and Steven Isserlis with all of whom she has performed on numerous occasions including at the Wigmore Hall, the Queen Elizabeth Hall, and in Japan and in France.

Arisa has released numerous recordings (ASV and Intim Musik labels) including the Ysaÿe Solo Sonatas and Piano Trios by Takemitsu, Tchaikovsky, Shostakovich, Ravel, Schubert, Dvořák, and Smetana.  Arisa has been invited to the Open Chamber Music Seminar of the IMS Prussia Cove each year for many years and has also taken part in their national tour.

Arisa is a Professor at the Royal Conservatoire in The Hague in Holland. A Trustee of the AWCT, she has directed 20 of the main Maiastra courses.

Home
About us
What's On
Blog
Support us
Contact